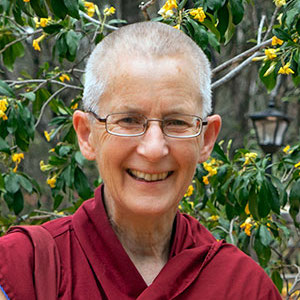 Held over three sessions on separate days, this mindfulness workshop will explore four powerful direct objects of meditation taught by the Buddha – the body, feelings, the mind, and phenomena. Resting mindfully, observing these four objects in turn, is a powerful method to gain experiential wisdom in relation to them, while deepening our mindfulness.

That first-hand experience can help clarify the Four Noble Truths, what to abandon and what to adopt. It can also bring us closer to the reality of self, our non-entityness in contrast to our ordinary concept of self. There will be a focus on meditation, with presentations to understand the material and plenty of time for discussion.

For facility fee details and to book a place, click “Register” below. Ven Tsapel doesn’t mind if people don’t attend all three sessions, but has requested that they attend from the start.

In 1979 Ven Tsapel attended her first Lam Rim course with Lama Zopa at Chenrezig Institute, followed by Refuge and Bodhisattva vows with Lama Yeshe. She travelled to India to take ordination from His Holiness the Dalai Lama.

She left to take up the position of resident teacher at Chandrakirti Centre, New Zealand and later, after a break for a two-year solitary retreat, became the resident teacher at the Golden Light Sutra Centre in Darken, Mongolia. In 2018 she moved to Atisha Centre/The Great Stupa where her primary focus is currently the Machig Labdron Nunnery building project.