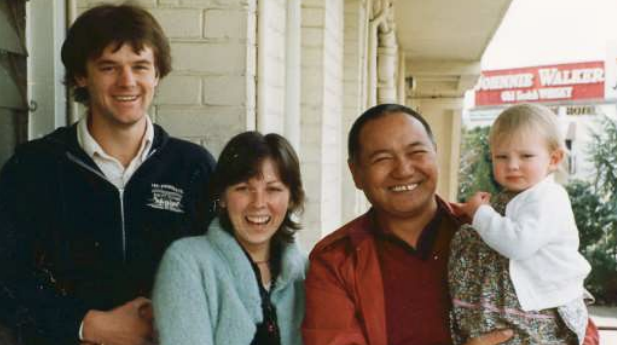 Buddha House is a centre for Buddhist study and meditation, located in the suburb of Magill, Adelaide, South Australia, and is affiliated with the Foundation for the Preservation of the Mahayana Tradition (FPMT) – a global network of over 160 centres including monasteries, nunneries, publishing houses, healing centres, hospices, and meditation centres.

On 1st August 2021 we celebrate the 40th anniversary of Buddha House, Centre for Advanced Buddhist Studies and the story about our centre is quite astounding. The founder of Buddha House was Lama Thubten Yeshe, the visionary Tibetan Lama who met with travellers coming to India and Nepal in the late 1960-70’s. He and his disciple Lama Thubten Zopa Rinpoche (our Spiritual Head) learned English and took the time to teach these travellers about Buddhism. This was the start of what would become an international network of centres and projects named the Foundation for the Preservation of Mahayana Tradition FPMT) around the world as these students returned to their homes.

Lama Yeshe visited Adelaide in 1981, responding to an invitation sent by Lyndy and Will Abram who had received teachings from him at Kopan Monastery in Nepal in 1977 and 1979.
Lama taught the ‘The Three Principal Aspects of the Path’ at the Box Factory over three evenings on 29th, 30th, 31st July 1981.
Lama Yeshe was accompanied by Venerable Dondrub, who was from Adelaide and was by then an ordained monk.

The timing of this event coincided with the Royal marriage of Prince Charles and Lady Diana, with the final talk being at the same time as the televised event. Lama said he did not think anyone would be at the talk that evening but as on the other nights, there were many people waiting to hear his talk. In fact, 75 people attended the three teachings and many asked if there was a centre where they could learn more about Tibetan Mahayana Buddhism. At this time none existed in Adelaide. As a result of this request Lyndy asked Lama Yeshe if they could start a centre in Adelaide. Lama said yes and to call it ‘Buddha House, Centre for Advanced Buddhist Studies’. This occurred while in a car driving to the airport as Lama was leaving.

Lama Yeshe rang Doc Wight, one of the people who had attended the talks and had attended a course at Chenrezig Institute the previous year. Doc recalls that the telephone call was in the middle of the night and when Lama Yeshe asked him if he would be the Director of the new centre in Adelaide, he was half asleep. He agreed and only realised the significance of the phone call the next morning.

Doc was the Director of Buddha House for a whole decade and led the centre through many significant milestones including the purchase of a long-term home for the centre at 3 Nelson Street, Fullarton, setting up incorporation and other legal necessities and bringing highly regarded teachers to the centre.

Some of the students who attended the talks by Lama Yeshe included founding members, Judy and Phil Perkins, Doc’s friend Doug Peers, Brenton and Ingrid Hill, Garry Hill, Linley Denson, Fran Kelly, Christine Leondiou, Tim Connell and Lyndy’s sister Kerry Gilbert as well as many others who helped in these formative years.

Buddha House was very fortunate in having Venerable Wendy Finster, Buddhist nun and clinical psychologist, living and working in Adelaide at the time of Lama Yeshe’s visit. She became the first teacher at Buddha House and provided a guiding influence on the centre for many years.

Doc lived in Fullarton and had a large shed in his back garden. It was decided to transform this into a ‘garden centre’ and together the students worked to transform the space into a large meditation room overlooking the garden.

In 1984 the opportunity came to purchase a blue stone villa in a nearby street for $97,000. 3 Nelson Street, Fullarton was a large rambling building with many outbuildings in the rear in need of major renovation. Dennis Kenny became a hugely important benefactor of Buddha House and lent the money needed to enable its purchase. Not only did he enable this to happen, but he also carried out a lot of the renovations himself. His sacrifices include the fact that he fell through the roof breaking a leg. The beautiful extension added to the rear of the building had a plaque of gratitude to Dennis. Over time many students helped with the huge amount of work involved in transforming this dilapidated building into a very beautiful and functional centre.

It was in this building that Buddha House Centre for Advanced Buddhist Studies was able to bring the following teachers to benefit Adelaide.

First Venerable Wendy Finster from 1982-85 (when Wendy then went to Italy to teach). Venerable Sangye Khadro (Kathleen McDonald) taught at Buddha House 1985-86. During this time Lama Llundrup (Abbot of Kopan Monastery) came to Adelaide and visited Kangaroo Island with Kimball Cuddihy, who owned land there. Kimball, with the help of many developed De Tong Ling Retreat Centre. Lama Llundrup was here for some months and developed a close connection with the Buddha House family.

Venerable Jampa Gendun came to Buddha House in 1987 and then in 1988 Khensur Kangyurwa Lobsang Thubten Rinpoche (ex-Abbott of Sera-Jey Monastery) arrived to be our teacher attended by a young monk, Venerable Jampa Tenzin. The significance of having such a highly respected and knowledgeable teacher is beyond comprehension and Buddha House was fortunate to have Rinpoche as our teacher for the following 15 years. Khensur Rinpoche was able to provide students with the highest levels of Tibetan Buddhist study as well as the three levels of tantric initiations. Jampa Gendun translated (from Tibetan) for Rinpoche and was also a much-loved teacher at the centre contributing a less formal program on topics associated with everyday life. Considering Khensur Rinpoche came to Buddha House when he was 68 years old and taught for so many years in a land far from his community, this was incredibly kind and we were most fortunate. After his retirement he first resided at Sera Je monastery and then came back to Adelaide where his many students requested that he teach. He first taught from the lounge room of a house and then at the students’ request opened the Tibetan Buddhist Institute, which is situated on the other side of town and is a thriving centre.

Geshe Pema Tsering came from Sera Je Monastery to be the resident teacher upon Khensur Rinpoche’s retirement and taught at Buddha House for 9 years. He was much loved by his students. Jampa Gendun had continued to teach at Buddha House with some periods away, particularly while working as tutor at the FPMT Masters Program in Italy and then settling in Sydney, Australia in 2009.

Buddha House left 3 Nelson Street due to Council changes resulting in a need to move suddenly in 2007. While searching for a suitable home the centre leased space at the Freemason’s Hall, Burnside until 2016. This was a difficult period for Buddha House, however good things happened too. Our current resident teacher Gen Thubten Dondrub, who was here at the beginning of Buddha House with Lama Yeshe, came back in this role in 2012 and in 2016 an incredibly kind anonymous benefactor enabled Buddha House to purchase the property at 496 Magill Road, Magill. Extensive renovations were possible due to the funds from the sale of the original building and volunteered labour by many but most incredibly by Will Abram (builder) and Carole Migalka (onsite project manager), who both worked full time on this transformation taking over a year of their lives. The current centre has come from much hard work and kindness.

Many teachers have visited Buddha House over the last forty years, too many to list, however the visit to Adelaide by His Holiness the Dalai Lama in 1992 coordinated by Dr Sylvia Barber incorporating three major events was a highlight. The Buddha house community helped Sylvia to organise a multi-faith event at St Francis Xavier Cathedral, a Dharma teaching and Chenrezig Empowerment at the Adelaide University Bonython Hall and a public talk attended by over 12,000 people at the Entertainment Centre.

Our Spiritual Head Kyabje Thubten Zopa Rinpoche first came to Adelaide in 1984 and led a retreat at Goolwa with many attendees bringing their young children. With the passing of Lama Yeshe in 1984 Buddha House has been fortunate to have Lama Zopa return to Buddha House seven times over the years. In 2004 Buddha House was requested by Lama Zopa to organise and host a month-long retreat. Gabe Edwards, the director at the time coordinated the event and it has been said to be the best organised FPMT retreat ever. This major event was taught by Lama Zopa Rinpoche and covered the Mahamudra teachings. Over 200 people attended with many international students and more sangha than had ever been able to attend one of Rinpoche’s retreats. This is because Buddha House sponsored their attendance, another first.

With Gen Dondrub as our resident teacher and a strong volunteer base the centre is thriving in our beautiful home in Magill. Programs at Buddha House include various levels of study of the Tibetan Mahayana Buddhist teachings, a range of guided meditations each week and popular outreach programs. These include a program for those recovering from addiction, a children’s class, programs for those with life challenging illnesses and mental health first aid courses run regularly. We also mentor the Himalayan Buddhist refugee community living in the Northern suburbs.

In 40 years this is a lot to achieve and it seems like the ‘baby’ centre in a garden shed is now well established and secure for the future. We not only have the centre but recently purchased a unit adjoining the property for our teacher to live in. Kind benefactors have helped us achieve this milestone, which is quite miraculous. The number of people involved in getting us to this stage are too many to name but have all played a huge part in this success. Their hard work as first-generation students has laid the foundation for the future, enabling those involved in keeping Buddha House going in the future to focus on ensuring the Buddha Dharma flourishes in Adelaide and benefits the community. As Lama Zopa recently said about Buddha House and our recent achievements ‘skies of merit’ and helping ‘billions of sentient beings’.

So, rejoice in this merit, enjoy being part of our centre and don’t hold back in getting involved in any way you like. Your Buddha House community and its teachings are there for you!